For the third consecutive year (2003 – 05) headstarted Anegada Iguanas, Cyclura pinguis, have been returned to wild as part of the ongoing recovery program to restore this critically endangered iguana in their native environment. Twenty-four iguanas were released on 5-7 October bringing the total number of headstarted pinguis returned to the wild to 72. Over the next year, the iguana will be monitored by Kelly Bradley (Dallas Zoo) by radio-tracking. Prior to release, eight of the smallest iguanas received surgically-implanted radio transmitters, and the larger 16 were fitted with externally attached units (see photo). The October 2005 group included eight iguanas in the 450 gram size class, which is the smallest animals released to date. By incrementally reducing the size of at least some of the releases each year, researchers will determine the smallest size iguana that can survive in a habitat with feral cats. Cats are the leading cause of the decline of the Anegada Iguana in the wild, predating most all of the new hatchlings each year. Until this threat can be eliminated, the headstart program will continue to produce iguanas large enough to avoid being eaten by cats. 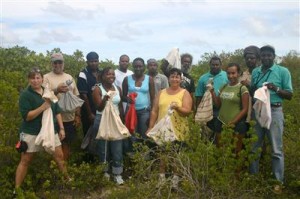 Survivorship of released iguanas has been encouraging, with 79% of those from 2003 still alive after two years, and 88% of the 2004 group still surviving after one year. Some of the other questions that biologists hope to answer from studying released iguanas include whether degraded habitat with introduced herbivores (cows, donkeys, goats) can support a large iguana population, the best habitat type to release iguanas back into, and if headstarting iguanas affects their ability to survive in the wild after 4-6 years in captivity.

These releases and the ongoing recovery program are funded, in part, by the IIF. Additional financial support came from grants the SSC Sir Peter Scott Conservation Action Fund, the AZA Conservation Endowment Fund, and the Dallas Zoological Society. Staffing for 2005 was provided by the Dallas, Fort Worth, and San Diego Zoos, and the Bronx Zoo-based Wildlife Conservation Society.