The Dominican Republic (DR) is home to two iguana species, the Critically Endangered Ricord’s Iguana (Cyclura ricordii) and the Rhinoceros Iguana (Cyclura cornuta) which is listed as Vulnerable. Considered a flagship species, the Ricord’s Iguana is endemic to Hispaniola, however only four subpopulations exist and the total range for the species is estimated at less than 100km2. This range is split between the four disjunct subpopulations with three in the Dominican Republic and one in Haiti where Ricord’s Iguanas were presumed extinct. With destruction of habitat, illegal land occupation, and predation by both humans and feral animals threatening the survival of the species, the Ricord’s Iguana became a priority conservation effort for the IIF which now provides core support funding in hopes that we can help save this species from extinction. With the assistance of local NGOs and volunteer organizations like Grupo Jaragua, OJAA, CIELO, and Oveido working in partnership with researchers Dr. Ernst Rupp (DR) and Dr. Masani Accimé (Haiti), year-round monitoring and research is being conducted to identify threats and implement conservation actions for the Ricord’s Iguana. The 2010 field season brought continuing efforts to the monitoring and protection program as well as some new technology. Camera traps were deployed in the DR in an effort to better understand nesting, hatchling survival, and predation. 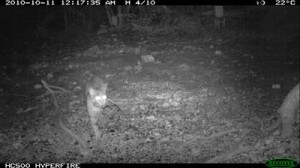 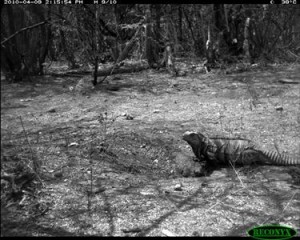 In 2009, a pilot study was conducted which utilized a camera trap to look at hatchling survival of both Ricord’s and Rhinoceros Iguanas. Camera traps take photos when triggered by heat and take still photos of animals that can be used for various research purposes. The pilot study in the DR resulted in conclusive evidence that feral cats were a major predator of iguana hatchlings. This has been seen in many species of iguanas, including the Jamaican Iguana, Turks and Caicos Iguana, and Anegada Iguana. Two camera traps were placed in a major nesting area this year, however, both of the traps were stolen shortly into the study. The DR team eventually recovered the traps, which had been removed by local iguana hunters. The study site has since been moved to another area of high activity where six camera traps were installed around a Rhinoceros Iguana nesting site until a safe Ricord’s study area for camera use can be determined. The data collected on the Rhinoceros Iguana can be extrapolated to the Ricord’s Iguana as nesting and hatching occur in similar habitats. Photos from camera traps monitoring the nesting sites regularly during hatching season showed the presence of feral cats. Photos also recorded the presence of a non-target species, the Hispaniola Racer (Haitiophis anomalus). The Hispaniola Racer is a snake species that is very rare, and to capture photos of this snake in its natural habitat is a prime example of the potential that camera traps have for studying not only a particular species but an entire area for complete faunal surveys. 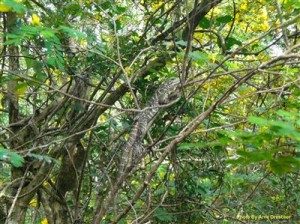 In addition to camera trap studies, a pilot study was also launched to conduct radio-telemetry on Rhinoceros Iguanas with the goal of determining optimal procedures for tracking hatchlings that can be applied to the more endangered Ricord’s Iguana in the future. The goals of the study were to look at hatchling survival and predation as well as to provide proper training for field assistants in the use of telemetry equipment. The results of this study are still being analyzed, however the preliminary assessment of the study shows that feral cats are a major predator of iguana hatchlings with native snakes also predating on a small number of hatchlings. Multiple training courses in use of camera traps, radio-telemetry, data collection, and maintenance of equipment were also conducted and provided training for individuals from all of the major NGO organizations in the DR and Haiti.

In addition to predation, major threats to the Ricord’s Iguana in the DR include illegal land occupation for conversion to agriculture and charcoal production, as well as harvest by humans. Grupo Jaragua and CIELO field assistants have been monitoring areas of the DR for charcoal pits and removing iguana snares from dens. Working with local authorities, these groups have been able to stave off further destruction of iguana habitat. The area around Lake Enriquillo has been under constant threat of illegal land occupation and conversion to agriculture. Grupo Jaragua has submitted a proposal to the Ministry of Environment to declare this critical habitat a Wildlife Refuge, however no action has been taken yet. In addition, CIELO has also begun an initiative to declare this a Municipal Protected Area. The IIF continues to provide core support to Ricord’s Iguanas and recognizes that every accomplishment this program meets is a move toward the recovery and survival of this species.